Raising funding as a first-time founder I’ve been fortunate enough to meet with some outstanding first-time entrepreneurs on a few different days during this week. In almost every case I can really feel the passion and determination they have, and I know that if they will just continue there is every chance that eventually they will be very successful.

One interesting topic which came up on a couple of different occasions was timing of raising funding as a first time founder. I’ve had entrepreneurs often talk to me with just an idea or a very early prototype with no traction and tell me that they want to raise funding. We closed our $450K seed round for Buffer at the end of last year, and joining the dots looking back I can see that a number of things came together which enabled us to raise the round.

Times during a startup at which you can raise funding

What I’ve learned from talking with some very experienced and highly respected successful serial entrepreneurs is that there are only really two good times to raise funding. The first is when you have just an idea, and you’ve not even started to build. The second is when you have a product with good traction you can show to investors. The thing is, if you choose to raise funding when you have an idea and nothing else, you lose the “traction” card. It’s been said many times before that "traction trumps everything", so if you’re trying to raise funding and you’re not using traction as leverage, then we must think about what else you have. In almost every case I’ve come across where I’ve seen founders raise funding just based on a concept, they’ve got a very good track record with probably an exit or two under their belt. This is what you’ll need if you decide not to make use of traction when you’re pitching.

Unfortunately for us first time founders, we don’t have the track record which we very much need in order to close funding without traction. Even if we were able to do so simply based on our idea, experience and passion, you clearly have to sacrifice your valuation and the quality of investors in order to close the funding: 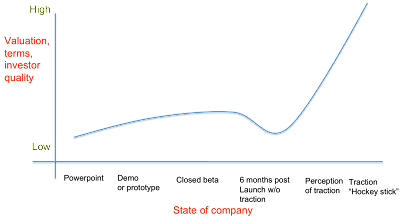 The best path to funding for first time founders

A note on incubators

Incubators and accelerator programmes certainly have a lower barrier to entry than raising a seed round. Many even encourage you to apply with just an idea. These can be great springboards, and they often have a demo day at the end which will give you the best possible scenario to raise your seed round.

However, even approach incubators with caution, because the same issues can also apply. Most incubators have a 10 week programme, with the final 3-4 weeks dedicated completely to the fundraising process, putting together your deck and pitch, and iterating many times until you are ready to go out there and raise. This leaves you with 6 weeks to build a product and try and gain traction. I would say that 6 weeks is a short period of time to try to build a product and gain traction to the point where your startup is investable.

Incubators are fantastic for the ecosystem and certainly accelerate the path for a founder in many ways. That said, whilst the structure of the programme and a “demo day” at the end are great, it does not guarantee raising a seed round.

How we did it with Buffer

Looking back on the path we took with Buffer, I think it is useful to share as in many ways we stumbled through and certainly made mistakes which cost us time, but in the end we found a path to raising our $450K seed round and the above thoughts are a result of what I’ve learned on that journey.

We were in the Summer 2011 class of AngelPad, an awesome incubator in San Francisco run by super smart people. A lot of our class were at very early stages with their startups, but we were fortunate enough to have good traction. The reason is that we worked on Buffer for around 10 months before we started the programme. We started AngelPad with 30,000 users and were generating around $4,000 per month at the time. We also had consistent 40% month on month growth.

We were able to spend the first 6 weeks of AngelPad taking that traction even further, doubling our userbase and tripling our monthly revenue. By the time demo day came, we had 60,000 users and an annual revenue run rate of $150,000, as well as the initial $120,000 from AngelPad. Looking back, it is quite clear that this was the largest factor in our investor pitches and essentially what enabled us to raise $450,000 and get some amazing investors and advisors involved.

Are you thinking about raising funding? What is your strategy?